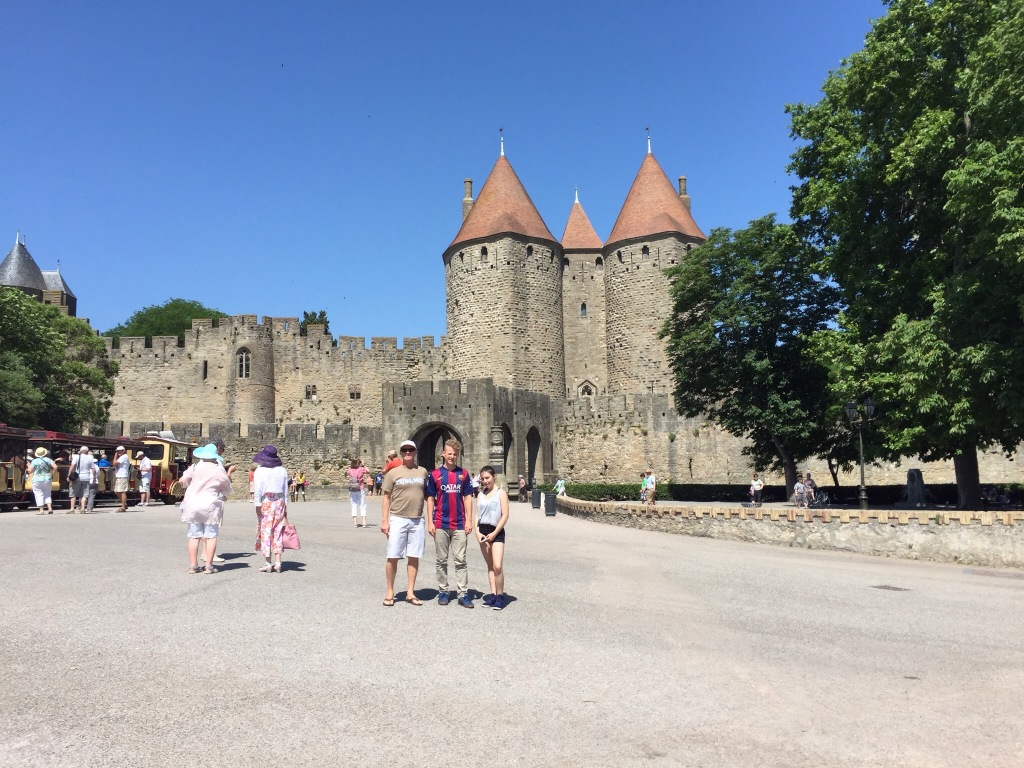 Today we visited Carcassonne. It was lovely! Like many of the places we have visited, there were almost no people. We have been told most Spanish and French people vacation in July and August. 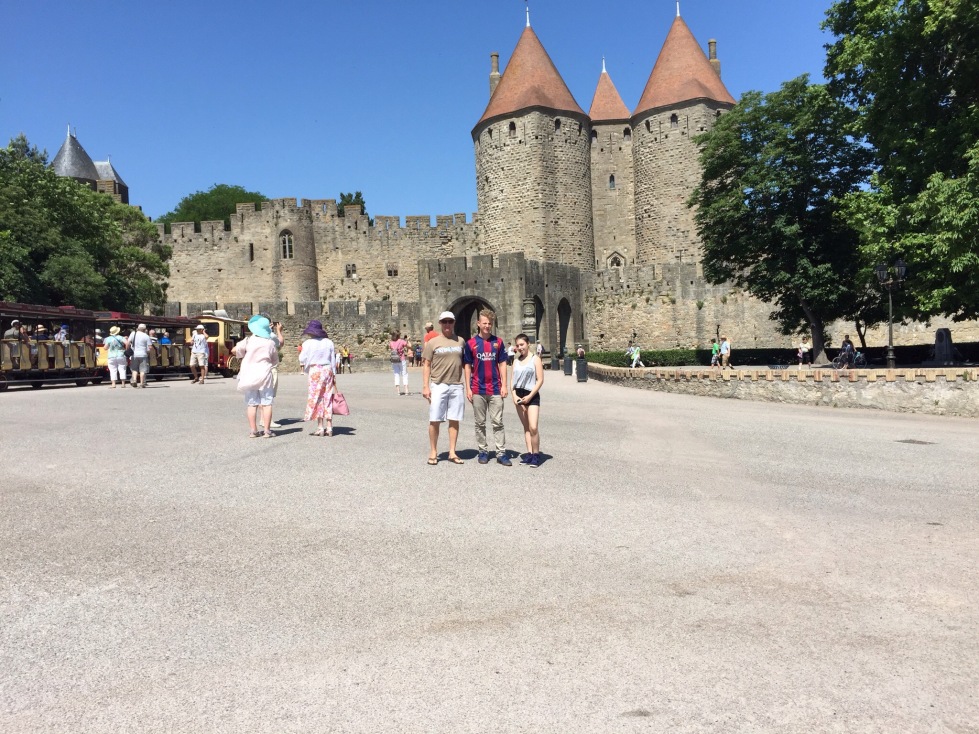 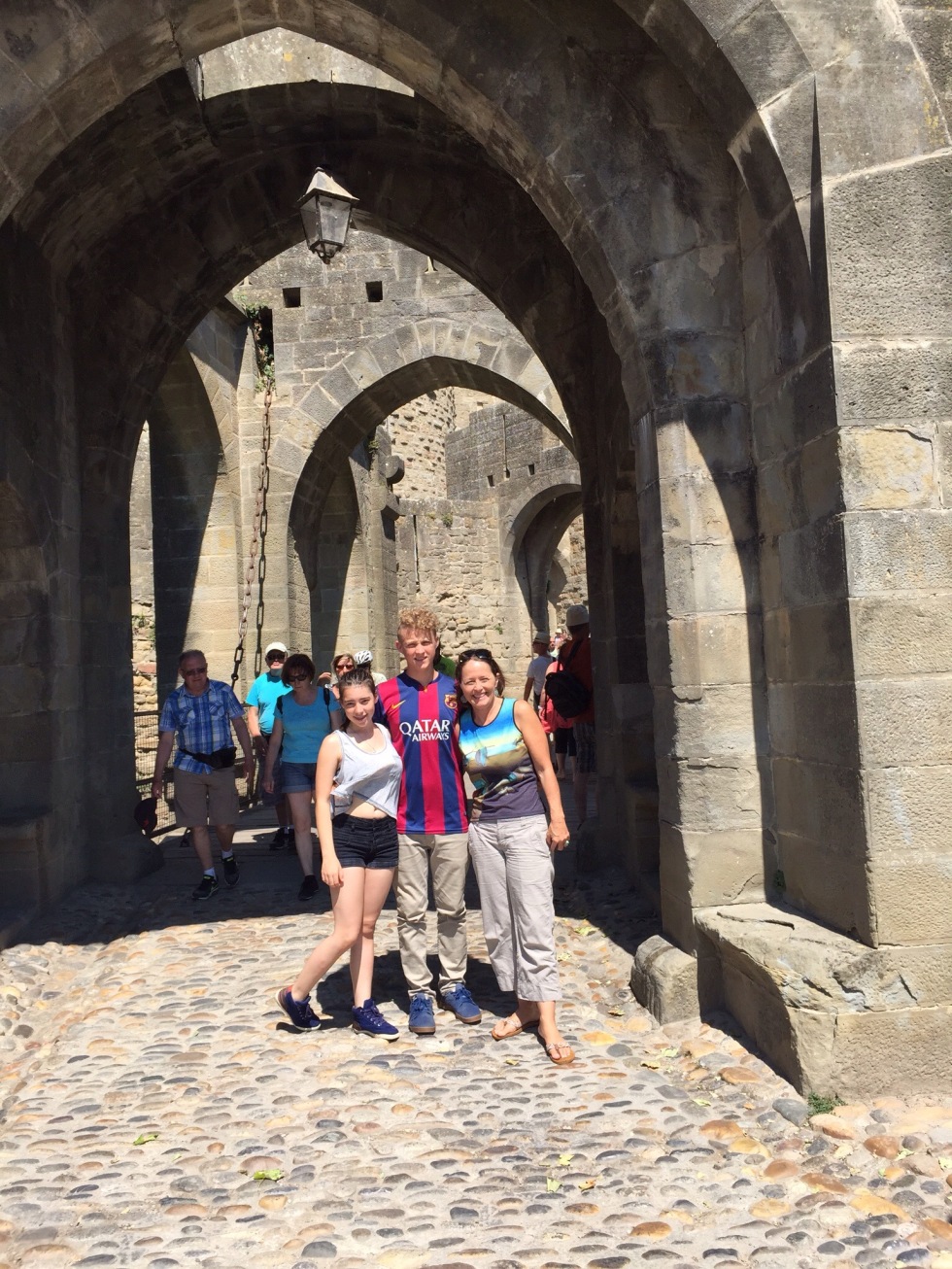 Check out my new Dali t-shirt. It was hot and sunny walking the wall!

We walked around the outer walls with Sean hanging off of many of them! This was free of charge. There are still some structures dated to Roman time, but much of the castle has been restored or is being restored. In the 19th century, the city was restored to its medieval appearance. 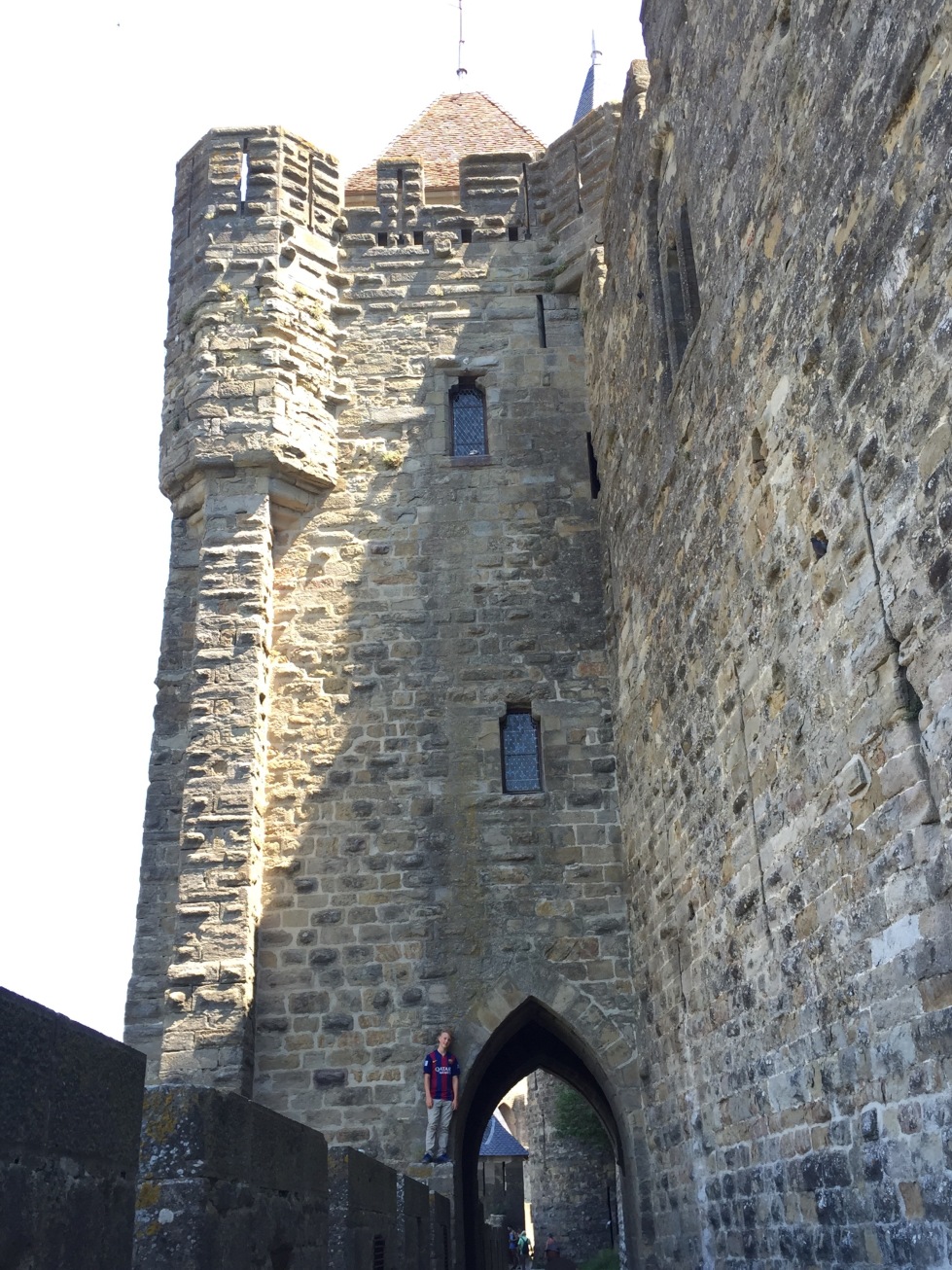 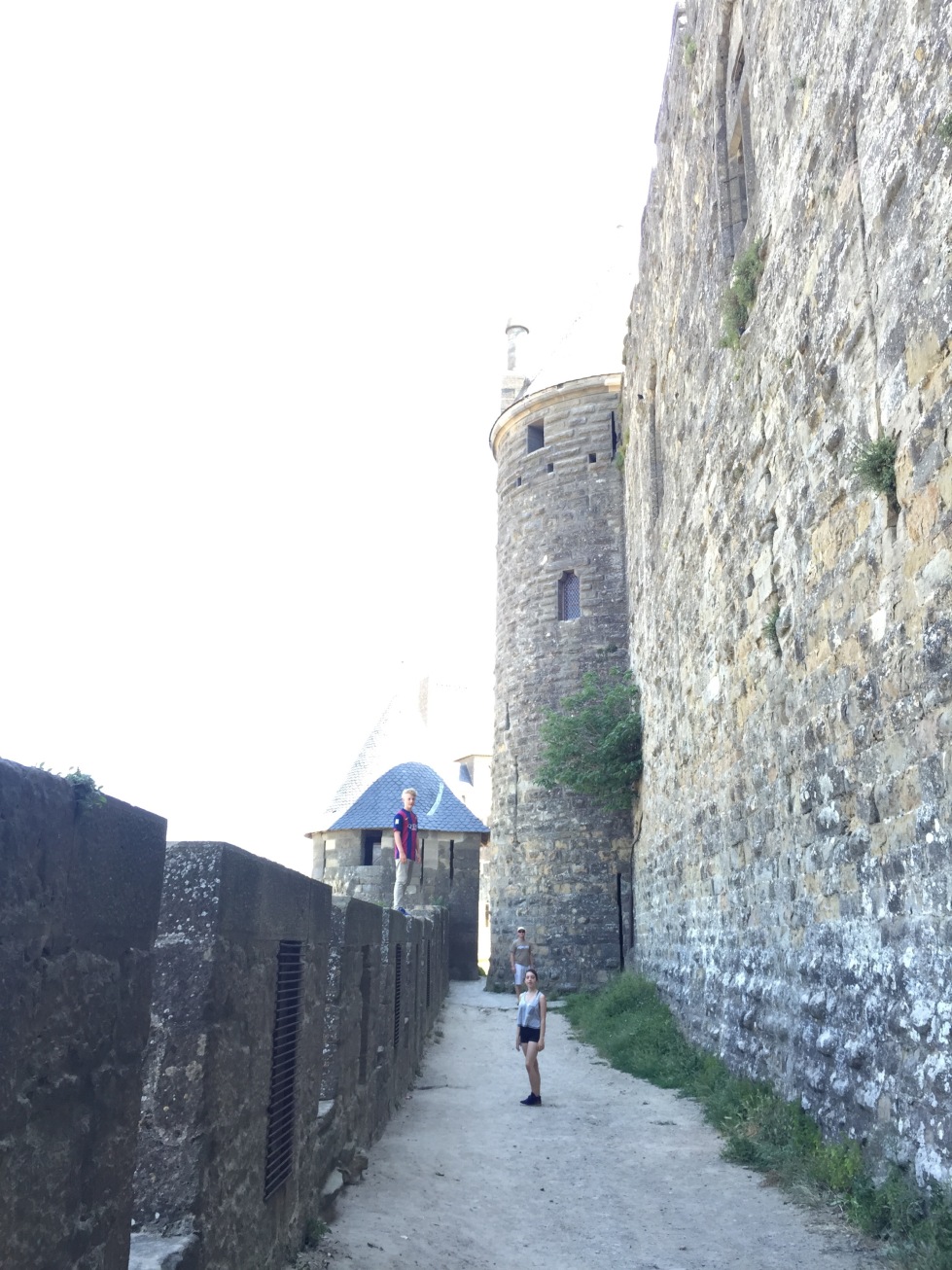 I could have had a child who walks on the path instead I got a wall climber. Check out how far down it is! 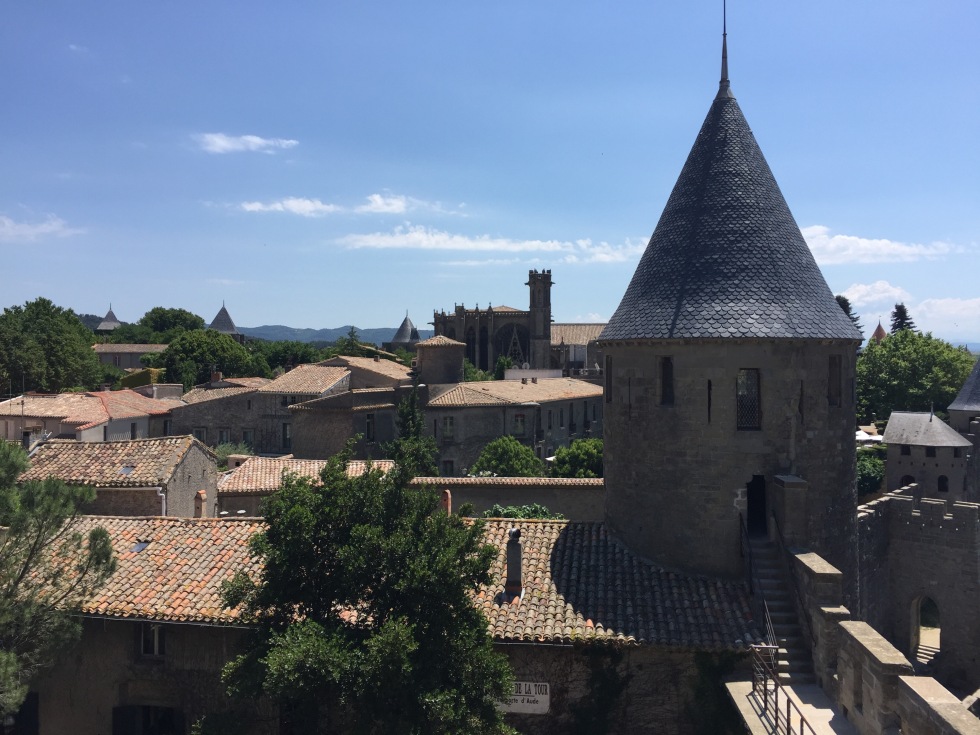 After walking around the outside we ate and then paid to walk around the inner castle. There were more people here. Including a school group of teens all dancing in unison to a pop tune. I taped it, but with the Internet service I am getting I cannot post it.

We could have stayed inside Carcassonne, and for some people that would be their optimum choice. It was hot and touristy though. We all agreed, we preferred the Abbaye du Capservy. It was about 25 minutes away through the lovely French countryside, http://www.abbayedecapservy.com/en/.

Today Sean had us laughing. One of the things that differs from one country to the next are bathrooms and toilets. Sean went into a bathroom that locked on its own when you went in. It did not unlock until you washed your hands. Once you were out it completely disinfected itself. Sean was freaking out that it might lock with him in it.

This evening Odile made reservations for us in a restaurant in the small picturesque town of St Denis. We had the best pomme frites ever, a dish I do not usually like much. They were crisp on the outside and light & flakey on the inside. Then we treated ourselves to dessert. Every dessert including the citron sorbet was handmade by the owner. I was told this is called fait maison. Yum!