May 29
We woke up feeling pretty good. Sean immediately wanted to go deal with tickets to Primavera Sound.

My shoes for the day. I would be back after getting the tickets to the concert. They looked so comfortable when I bought them!

We figured the subway out. Once again I understand the language better than anyone else. Sophia and Jim were both going to brush up on 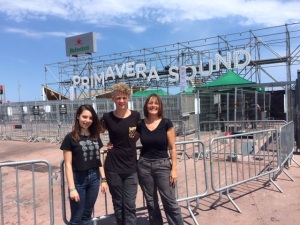 their Spanish, but we are having to wing it on my high school and college Spanish. Jim and I like to take it easy the first couple of days, and then go like the wind the rest. When we got in the train we all were a bit grumbly and it was then I realized we were not quite as alive as we felt upon waking. (Dropping grumbly teens off in a foreign country at one of the largest music festivals with about 110 rules to follow seemed good in some ways and worrisome in others.)

There was tight security and the crowd looked nice. There were people from all over the world, judging from the accents we heard & many groups looked about the age of our kids. They did make Jim pay for a ticket and take the kids in, but Sophia’s ticket was free so it worked out to what we expected in the first place.

With the kids deposited, Jim and I went back to the apartment, washed a load of clothes, and went to the Gothic District. The Gothic District is the old part of Barcelona built by the Romans. It has the narrow streets, cobbled walkways, twisty turns, and old buildings I love to see. http://en.m.wikipedia.org/wiki/Gothic_Quarter,_Barcelona

The lovely church spire was designed by Gaudi (more on him tomorrow).

Here is a photo of Roman ruins that are being excavated.

I am a vegan and a foodie. Before becoming a vegan, it was hard for me to figure out what restaurants we were going to go to. Now I have many fewer to choose from, so it is easier. We went to a superb!!! restaurant last night. I am known among my friends and family for my healthy eating. I cannot get too far off my diet when we travel if I want to feel good. I have found that none of us feel good after 1 week if we eat too differently. So we stick as close as we can to what we eat at home.

Barcelona is a good city to be getting over jet lag. It stays open late and doesn’t get started early. Every one but me woke after noon, and we are staying up until the early hours of the morning.  The time in Barcelona is 9 hours off that in California.