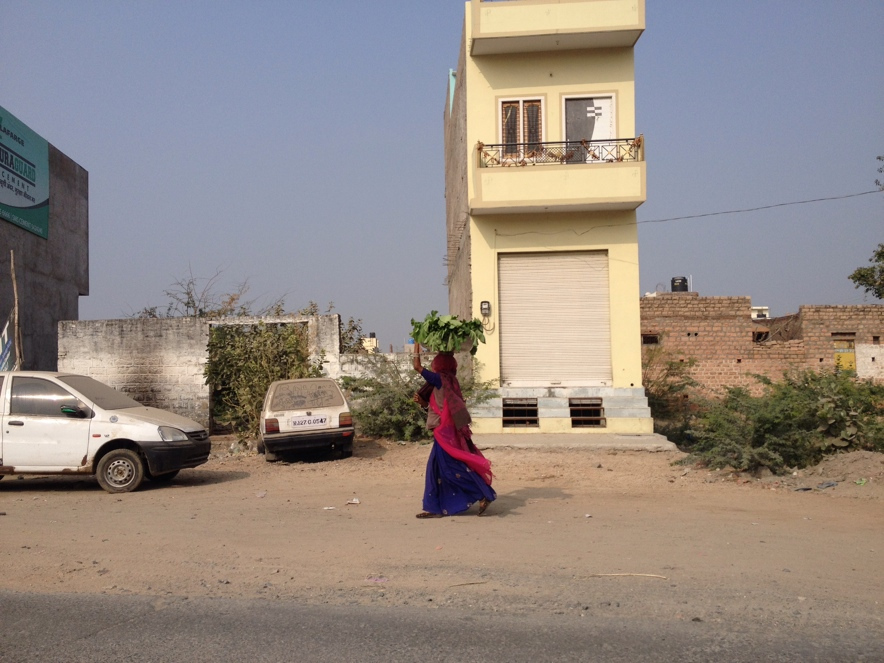 When I woke up this morning my plan for the day was to catch up on all my blog posts. The drive was going to be a long one. I am writing about events that happened a couple of days ago in present tense. It is easier to do that when events happened yesterday. The real problem with getting behind on my blog posts is that I forget some of the things I want to talk about. Well that didn’t happen, I mean the catching up part. The drive was too good to miss. In addition to photos and thoughts Jim and I have been recording sounds and videos to share. Unfortunately until the hotel/homestay we are at in Jaislamer, the wifi hasn’t been good enough to send anything like that. I will try to get a few things like that off today as well. 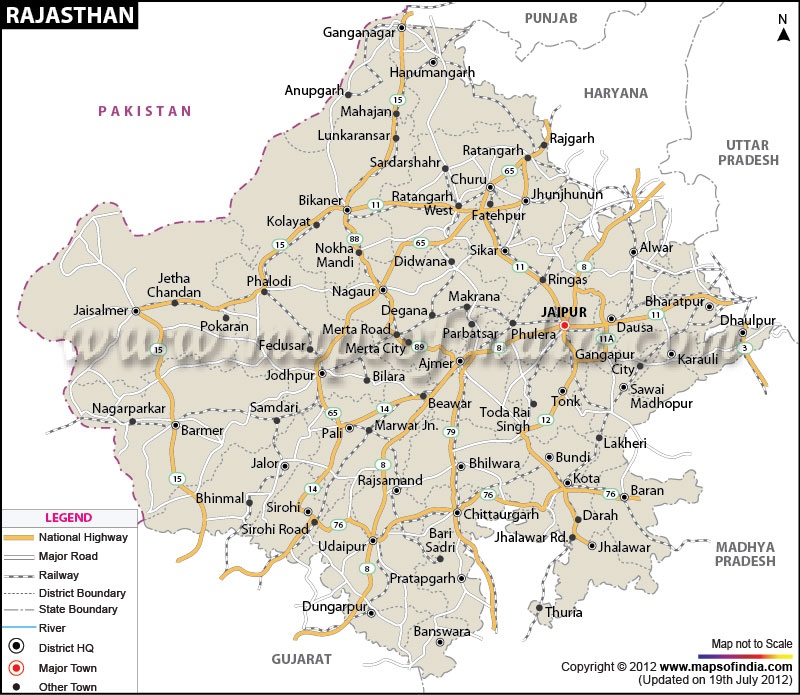 Udaipur is toward the bottom, the South of Rajasthan. Jaisalmer is in the middle as far as north and south go but it is on the West side. In fact Jaisalmer is as close to Pakistan as Jim and I are likely to ever get.

Back to the drive… We stayed in the City Palace Complex in Udaipur. This was like a quiet oasis in the middle of a bustling city. It really was a fun and unique experience. We left the Shiv Niwas and very quickly were thrust into the hustling bustling city. So after we turned off into narrow country roads with villages separated by farmland. I love looking at the towns. Each one is a little different.

There are miles of mustard being grown. At first I thought it was fields filled with weeds. Many of these photos were taken speeding along in our car, sorry if the quality suffered.

I asked Sohdi about the road ahead and he told me it was a one lane road. I thought he meant a 2-laned road with traffic going in both directions. You know, that it had been lost in translation. But no, it was a 1-laned steep and windy mountainous road. 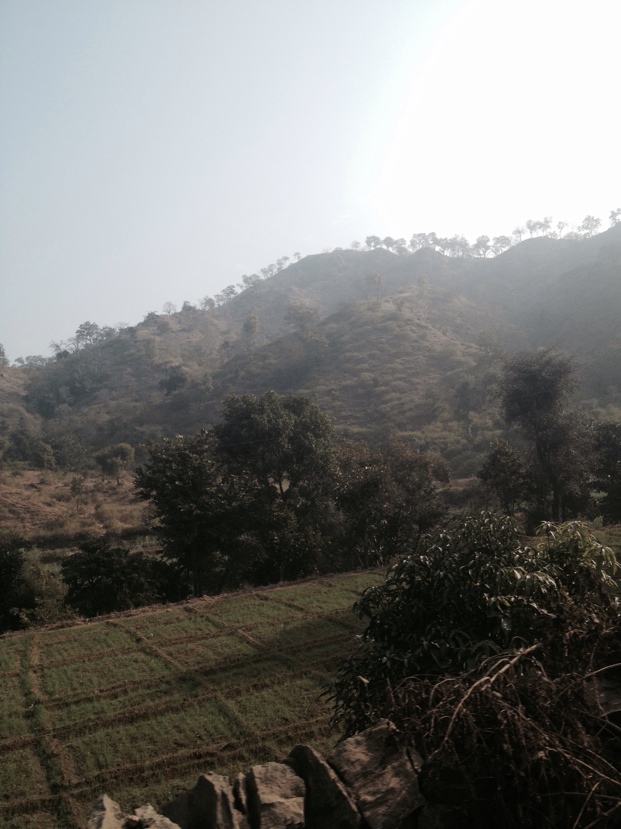 It was verdant and lovely. Here is a view of some farmland.

This shot was hard to get. As we were driving I noticed that there were regular water pumps on the sides of the roads. When we saw them there were almost always women and/or children at them collecting water.

As you can see it would be really hard if you were afraid of monkeys in Rajasthan, India. 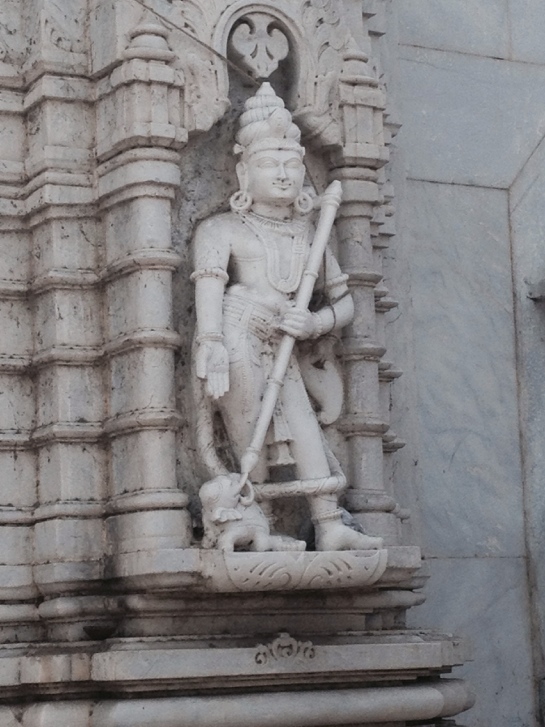 We stopped at a Jain Temple in Ranakur. I learned a lot about the Jain faith the next day, I will tell you about it in that post. We were allowed to look at the outside of the temple complex, but not go inside. There are only certain hours people who are not of the Jain faith can go inside their temples.

So we stayed outside with the monkeys.

I hope you find it easy to follow along when I post photos of signs. It is the best way I have found to pass along the information at sites where they have them.

This site is remote. It captures the imagination to have such an impressive temple at this location. 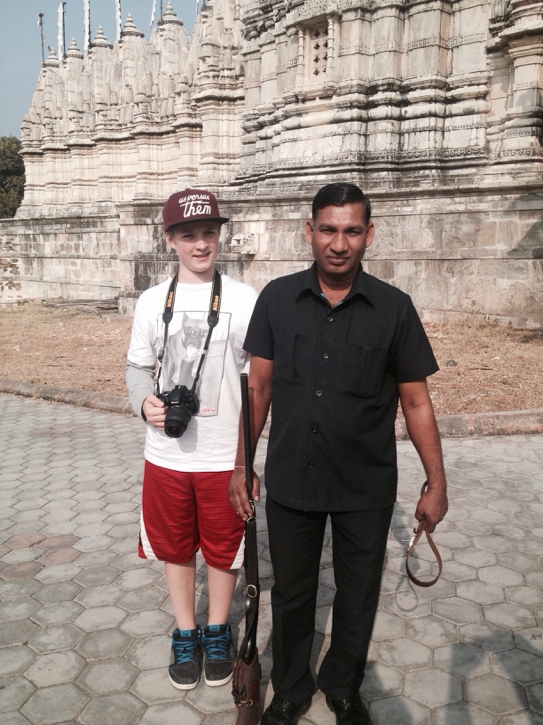 A group of men, one with a gun who is also holding a belt guarding an entrance at the temple, this also captures the imagination.

I wonder what Jains do about big beehives like this one on the side of their temple? We left with more questions than answers. 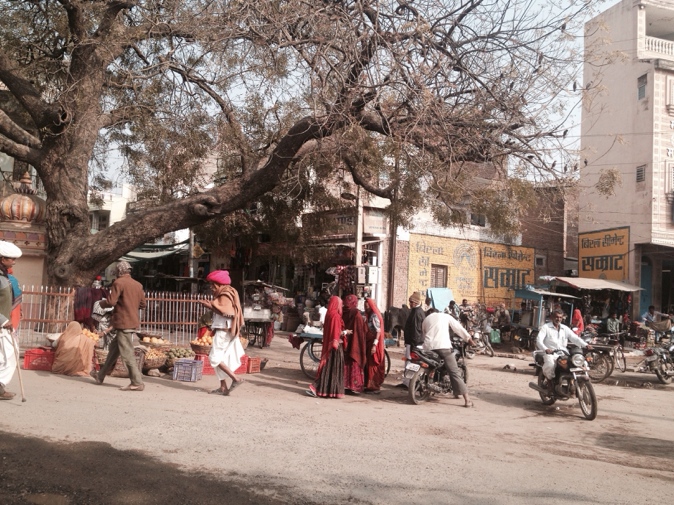 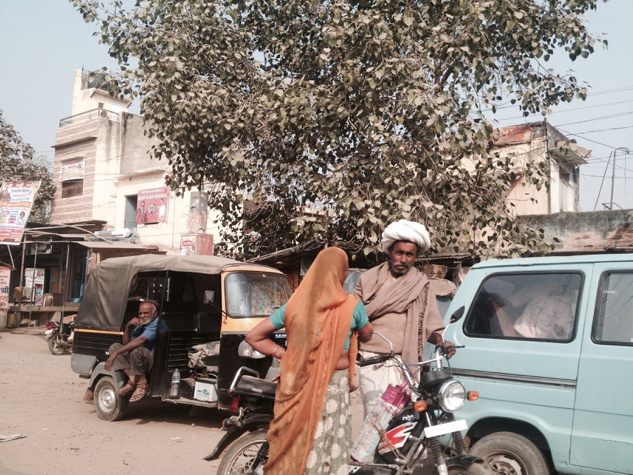 The turbans are getting bigger the farther Northwest we go. They are also put on in a more haphazard way for the most part. Our driver Sodhi is Sikh. Perhaps I am just so used to sitting behind his nice orderly turban. Sikh men as they call themselves put their turbans on so nicely and neatly it is impressive.

Women are more likely to have their faces covered in rural villages and towns. Not the covered faces but as far as more conservative dress, the few times I was not dressed conservatively, I felt self-conscious.

I, of course, look at this and wonder about spinal damage to the neck. It is more common to see women carrying things this way than it is men. Sometimes the women even have their faces covered. I would be so worried about tripping and hurting myself.

The landscape went from verdant and mountainous to deserts, similar to what we have in Bridgeport, Ca. When that happened goats became more plentiful. We started to see fewer monkeys and more peacocks and camels. 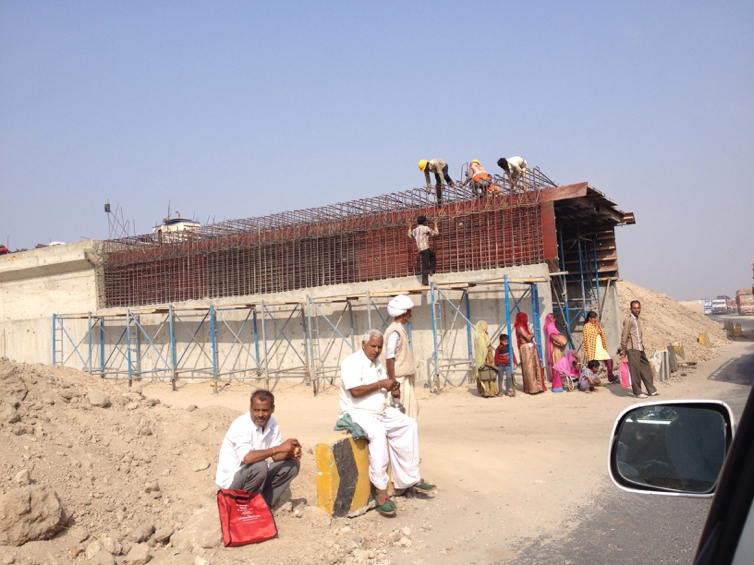 Everywhere we went in Rajasthan they were fixing the highway up. Sodhi told us it would all be finished in no less than 2 years.

These highway improvement projects are important in a country where most goods are transported in trucks. When a driver wants to pass here they honk to let the car they are passing know they are being passed. It makes for a lot of honking. Drivers in India need to be highly skilled. There are animals, vehicles, and people all over the place everywhere you go crossing roads, driving different speeds, just doing all sorts of things creating lots of unexpected situations you have to be careful of.

All this trucking creates a highly mobile group within the society. I have read that truck drivers in India are in a high risk group for HIV transmission, and that their mobility compounds the problem for all involved.

As we got close to Jaisalmer, which is close to the border with Pakistan, we started to see more and more Army trucks on the road. There is a large Army base just outside of Jaisalmer. Sodhi is from Punjab, close to Pakistan. He told us it is awful in Pakistan, that the government is very corrupt there. I asked him about corruption in the government in India. He said it was bad in India too, but not as bad as it is in Pakistan. He pointed to a barbed wire fence with four strands of barbed wire across it and told us that is what was across the area near his home, separating the two countries, India and Pakistan. I asked him if the people were different in customs, or dress, speaking, or religion. He told me they were all, “same, same.” He said it was better to be from India though, even though the people of the United States helped Pakistan more. I told him our government was more afraid of terrorism from Pakistan than from India. He agreed the threat was from Pakistan.

A couple of times on the drive we stopped for a while for trains to cross. They are very cautious and give lots of time for trains to get to the crossings, which is probably a good idea with the cow and dog wanderings/moseyings as they are. All the vehicles turn off their motors and people get out. A few of us went up to take photos, much to the amusement of the locals. 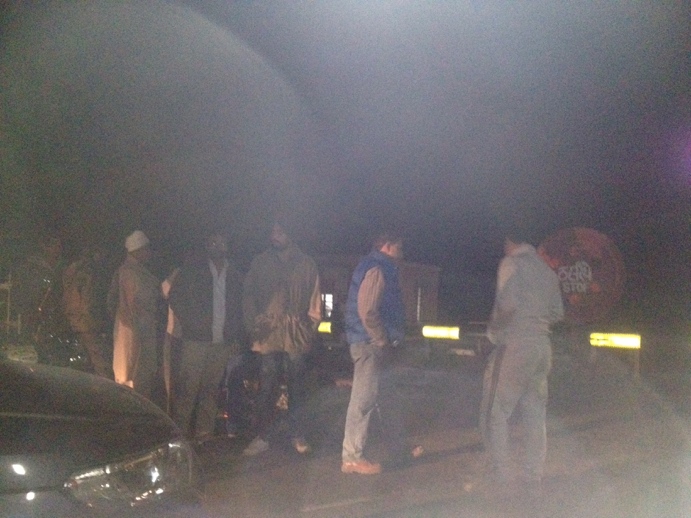 I was the only woman who walked up to the stop and I did so unaccompanied. I got lots of stares. Everyone was friendly, just curious.

We arrived at our hotel/homestay in Jaisalmer at dinner time. I really appreciate someone with an attention to detail, that is what we found at the 1st Gate Homestay. It has a restaurant at it called Fusion which had Italian and Indian cuisine. Oh yes and it has a PUG!!!!

Here is Sean sitting in the downstairs restaurant with one of the owners, Minoch, and his dog Ting Tong, TT. She is about the same size and age as Sean’s dog Jezabel. Minoch heard Sean’s cough and had a special tea made for him. It really helped. I ordered Italian food for Sean and went up to the upstairs restaurant with Jim. 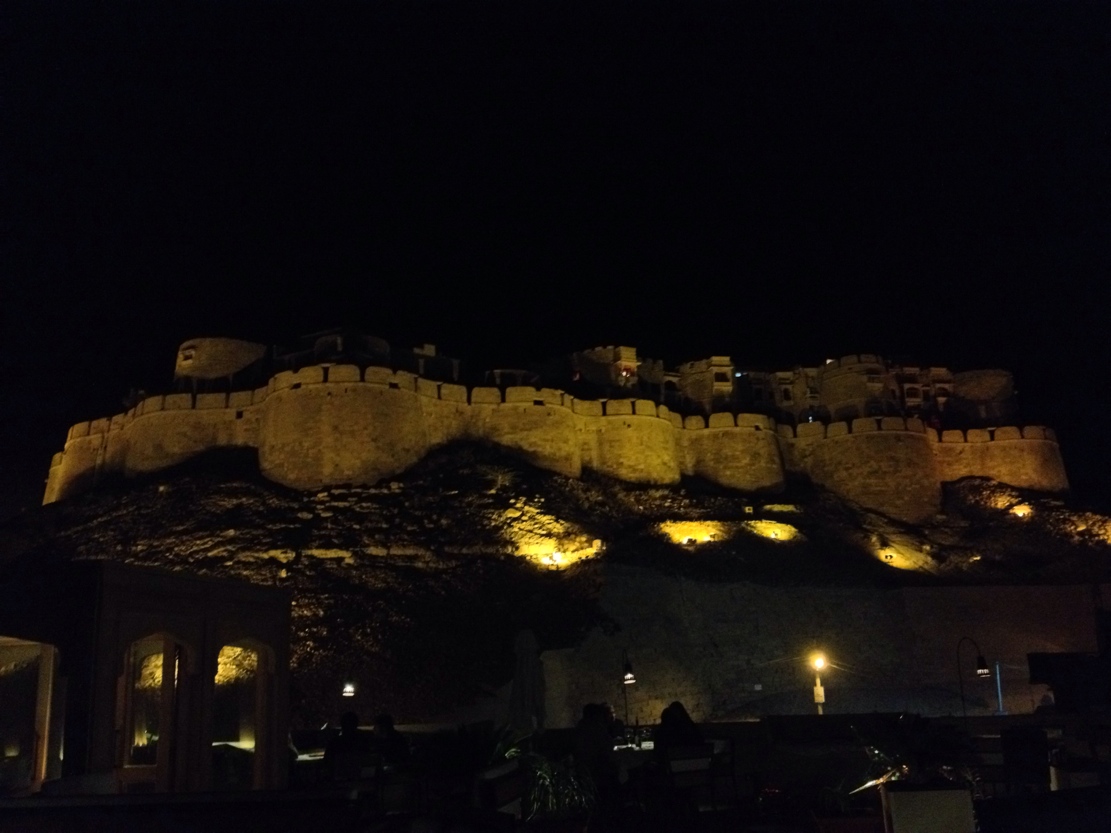 This is the view from the rooftop restaurant at 1st Gate. I ordered for Jim, salad and pasta with an arrabiatta sauce. He had never had that sauce before. He loved it, and now has a new favorite Italian dish.

There I am with the fort behind me.

It gets cold in the desert at night. TT got her jacket on so she could come and sit at the entrance to the kitchen.